VGP – Viet Nam and the UK should step up cooperation in the fight against illegal immigration, suggested Vietnamese Minister of Public Security To Lam. 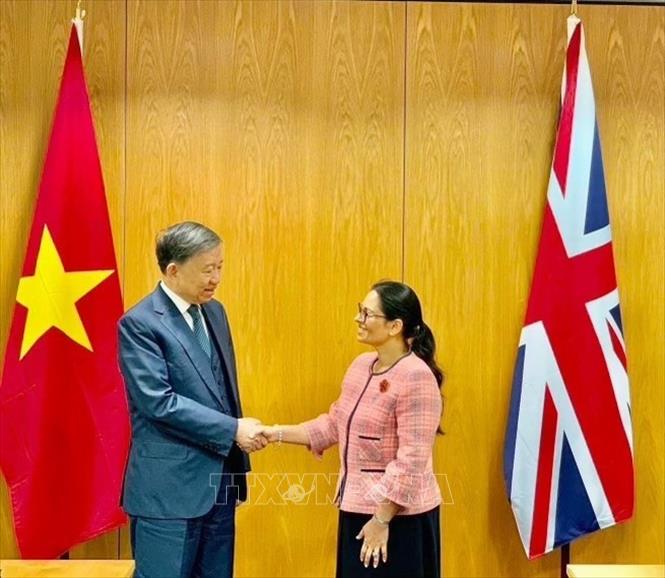 To made the suggestion at his meeting with British Home Secretary Priti Patel in London on November 1.

He congratulated the UK on becoming the dialogue partner of ASEAN, adding that Viet Nam is willing to play a role in promoting cooperation between ASEAN and the UK, and advocate the UK to join the Comprehensive and Progressive Agreement for Trans-Pacific Partnership (CPTPP).

Viet Nam attaches importance to the relationship with the UK, regarding the UK as one of priorities in its foreign policy for peace, cooperation and development in the region and the world, To affirmed.

He said Viet Nam highly values the UK’s agreements with the EU after Brexit in different fields, the country’s “Global Britain” strategy, and its announcement of the Integrated Review of Security, Defense, Development and Foreign Policy by 2025 with a vision towards 2030.

For her side, Patel spoke highly of the significance of To’s visit to the UK as it contributes to further enhancing bilateral cooperation in dealing with non-traditional issues, especially cross-border organized crime like economic crime, illegal migration, human trafficking, money laundering and high-tech crime.

She underscored that the UK commits to strengthening cooperation with ASEAN, backing the ASEAN centrality in maintaining the regional security structure.

The UK will continue making active contributions to maintaining peace, stability, security and safety of navigation in the East Sea in line with international law, particularly the 1982 United Nations Convention on the Law of the Sea (UNCLOS 1982), Patel emphasized.

She announced her plan to pay a working visit to Viet Nam in the first quarter of 2022 to discuss cooperation plans between the two countries./.